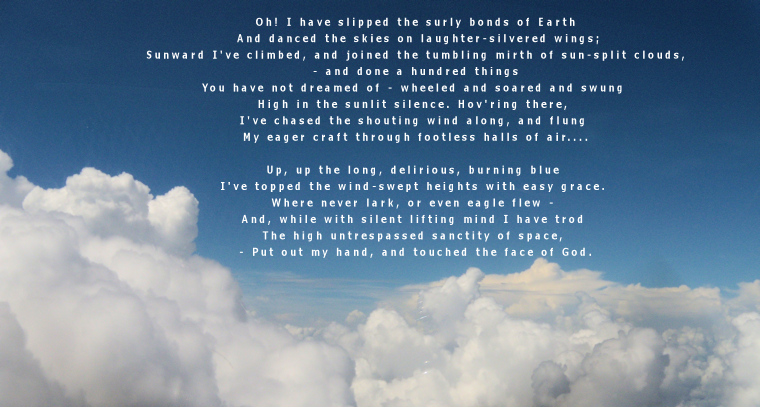 This page is dedictated to the memory and honor of Jack Voorhies, Bobby Voorhies, Charles W. Brown, Charles C. "Charlie" Conour, Spencer R. Haddock and all other service men and women living and dead who have served our country through both war and peace time. We thank you and salute you all and owe a debt of gratitude that can never be repaid.

The Poem "High Flight" was written by John Gillespie Magee, Jr. (9 June 1922 - 11 December 1941) and has become a favorite of Pilots and Non-Pilots alike. Royal Canadian Air Force Pilot Officer J.G. Magee, Jr. served in World War II, flying the venerable Supermarine Spitfire for the RCAF. He was killed in a mid-air collision, during training exercises over Lincolnshire between the two RAF Airbases of Cranwell and Digby. The recording found on this page was recorded by Jack Voorhies to honor his brother Bobby Voorhies.

Jack Voorhies (January 6, 1927-March 4, 2008) graduated from Sheffield (Alabama) High School in 1944, then served on an LSM in the U.S. Navy during the occupation period following the close of combat operations of WWII. Jack returned home and afterwards attended the University of Missouri, later transferring to Northwestern University in Evanston, IL and gradating from Northwestern in 1950. He returned to the Shoals Area of Northwest Alabama and interviewed for a position at radio station WLAY and was hired on the spot. After moving for a short time to a radio station in Texas and then to WMT in Cedar Rapids, Iowa, Jack Voorhies returned to the Shoals Area around 1960 and went to work at WVNA. During this period Jack began to develop such characters as: Luther Appleby, Irving Loblolly, Chick Churn and the Chilly Dippers from Del Rio, Texas, Sylvia Side-Saddle, Clyde Perot and the Naremore Family. These are some of Jack's zany characters that provided much laughter and entertainment to so many people whose lives were touched in a very positive way by Jack Voorhies.

Bobby Voorhies was a pilot in the Army Air Corps during World War II, flying numerous combat missions over France in a Martin B-26 Marauder, medium bomber and was ultimately awarded the Distinguished Flying Cross for his heroic acts of combat flying. Bobby was the older brother of Jack Voorhies. While Bobby was on leave and visiting his home in Sheffield, AL, he decided to give his younger brother a rare treat. They drove to nearby Courtland Army Air Field (still an active airport today. See FAA Identifier 9A4) where Bobby was able to borrow a Vultee Valiant, BT-13.

The Vultee "Vibrator" as it was affectionately known by its' pilots was used as a Basic Trainer during World War II. Bobby and Jack flew over their boyhood home and "buzzed" their mom's house and toured the Shoals area, including beautiful vistas of the Tennessee River. Jack shared the story of this flight experience when he was in his late 70's. It was obvious from the gleam in his eye during the re-telling of this event, that this special flying experience made a lasting impression on Jack and was a treasured memory. Two brothers, on a very memorable flight, had slipped the surly bonds together!

Bobby and Jack both returned from World War II and had many other memories throughout their lifetimes but the flight over the Tennessee River near Muscle Shoals, AL held a special spot, despite the fact that over 60 years had passed since the flight. Jack recorded the poem "High Flight" as a tribute to his brother Bobby.

Charles W. Brown was killed in action on January 30, 1945 at the age of 22. Private Brown was attached to the 13th Medical Supply Depot and was sent out as part of the Infantry Replacement Depot during the Battle of the Bulge. Charles was posthumously awarded the Silver Star. The Silver Star Medal was presented to his mother Lela C. Brown in a quiet ceremony at Fort Oglethorpe, GA by then Colonel John A. Hoag, commanding officer. The citation, which Captain Raymond D. Rudder, Personal Affairs Officer read, stated:

"By direction of the President, the Silver Star decoration is awarded posthumously to Private Charles W. Brown, for gallantry in action in the vicinity of Welchenhausen, Germany. When Private Brown's company crossed the frozen Our River, intense machine gun fire and sniper fire inflicted casualties upon the company. Though wounded in the shoulder while administering first aid to a casualty, Pvt. Brown made his way to a position of cover,dressed his own wound and continued to aid the wounded. At the risk of his life, he subjected himself to the heavy observed fire and ran across the ice to attend a wounded soldier. Upon reaching the casualty he was mortally wounded by sniper fire. His gallantry will be a lasting inspiration to all his comrades, and was in accordance with military tradition."

Charles C. Conour, Sr. (May 4, 1926-January 16, 2019) Born in Sumner, IL to Carroll Casper (Tad) Conour and Inez P. Hill Conour. Charlie completed his senior year at Sumner High School in the spring of 1944. Charlie enlisted in the U.S. Navy on March 31, 1944 and entered active duty in the U.S. Navy on June 2, 1944, reporting to the NRS at Springfield, IL and having been found fit to serve was instructed to report to boot camp at Great Lakes Naval Training Center, Illinois. From Great Lakes "Charlie" and the rest of his ship mates traveled to Camp Bradford, VA near the Virginia Beach area for amphibious training. Soon they would travel via train to Jeffersonville, IN to pick up U.S.S. LST 799 (later renamed the U.S.S. Greer County) from the Jeffersonville Boat & Machine Company. 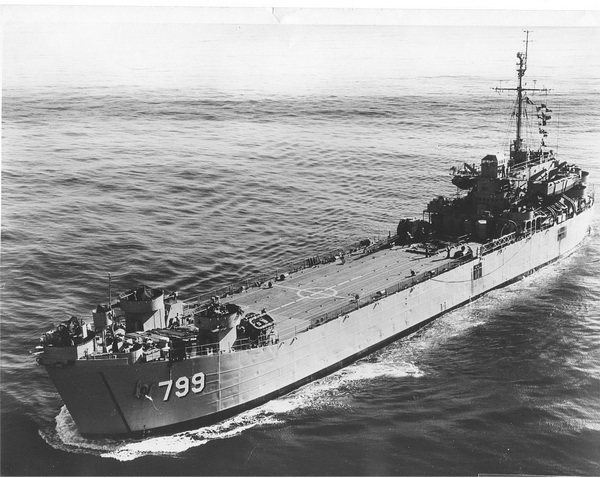 The War effort and production was in full swing and when they arrived at Jeffersonville, they had to wait several days so that the paint on their new LST could dry! U.S.S. LST 799 would soon be on its shakedown cruise, then on to Gulfport, MS, the Panama Canal, then on to San Diego & San Francisco before heading west across the Pacific, destination: Saipan. From Saipan the crew sailed to Okinawa, arriving on D-Day plus one, where the largest amphibious operation of World War II was under way. The battle for Okinawa resulted in the highest number of casualties in the Pacific Theater during World War II. Charlie and his fellow sailors experienced an ever-increasing threat of Kamikaze Attacks during this time. With the Japanese using desparate measures through increased kamikaze attacks, a nearby LST was struck by a kamikaze and a fire fighting crew from U.S.S. LST 799 was sent to help fight the fire. The constant threat of kamikaze attacks would continue throughout the remainder of the war. Seaman 1st Class Conour was "honorably" discharged on May 19, 1946 and received the American Area Ribbon, Asianic-Pacific Area Ribbon with 1 Star, the Phillipine Liberation Ribbon and the World War II Victory Ribbon. He returned home safely, later married, settled in Alabama and raised a family with his wife of over 63 years, Glenn Dora Brown Conour. His wife Glenn passed away on September 14, 2016.

Spencer R. Haddock was born June 24, 1941 in Florence, Alabama to Gertha C. Haddock and Margaret (Hyde) Haddock. He graduated from Coffee High School in Florence in 1959. Spencer, with friends Jack Askins and Myron Wright, joined the Alabama National Guard and completed six months active duty training as construction linemen in August 1960. Upon returning to his unit in Florence, Spencer enrolled at Florence State College (now known as the University of North Alabama) and was graduated in 1965 with a degree in Accounting and received a Regular Army Infantry Officer commission as a distinguished graduate of the Advanced Reserve Officers Training Program. He was immediately ordered to active duty and upon completing Infantry Officers Basic training, Army Ranger training and Army Airborne training, he was assigned to Gelnhausen, Germany where he served as a platoon leader, company commander and battalion adjutant for the 2/48th Infantry Battalion in the 3rd Armored Division.

In May of 1967 with the escalation of fighting in Vietnam, Spencer was reassigned to the 2/12th Infantry Battalion of the 25th Infantry Division located in Dau Tieng and Cu Chi, Vietnam. While assigned to the 2/12th Infantry Battalion, Spencer served as company commander of “D” Company where he led his company in numerous engagements against hostile Viet Cong activities including the major surges against Saigon and a number of large U.S. military installations during the Tet Offensive of 1968. After returning from Vietnam in August of 1968, Spencer attended the Officers Career Course and received extensive training in information technology. During the remainder of his military service, he managed a number of large Army computing organizations including the Department of the Army Enlisted Systems Division responsible for maintaining automated personnel records and making unit assignments for all enlisted military personnel. During his 10 years of active military service, Spencer received a number of ribbons and medals in recognition of his combat and non-combat service. He resigned his commission in May 1975 to pursue a career in the private sector as an information technology professional. After 30 years working as a senior information technology manager and consultant, he retired and is now enjoying life visiting with family, travelling, playing golf and fishing. He has two children and four grandchildren. His daughter, Michael is married to Chuck Conour. They have two children, Elizabeth Conour and David Conour. His son, Spencer, is married to Amanda Burgess. They have two children, Allie Haddock and Spencer Wade Haddock.